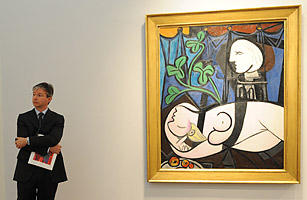 All it took was a little over 8 minutes to set the record price for a piece of art sold at auction. On May 4, Christie’s sold Pablo Picasso’s Nude, Green Leaves and Bust, a painting created in the span of a single day in 1932, for $106.5 million dollars. The painting, which is of Picasso’s lover Marie-Therese Walter, was previously owned by a California philanthropist. The price beats the previous record for a piece of art, set this past February, of $104.3 million, for Giacometti’s sculpture “Walking Man I.” This is not nearly the first time a Picasso has sold for a record price, however. In 2004, the painting Boy with a Pipe (The Young Apprentice), sold for a then-astounding

personally, i  don’t admire this piece of art it wasn’t the best of what Pablo drew.

Pablo tends to draw his portraits using monograms and geometry. that wasn’t very attracted to many people’s eyes.

though it is admired by his biggest fans and still sold at 104.1 million dollars.